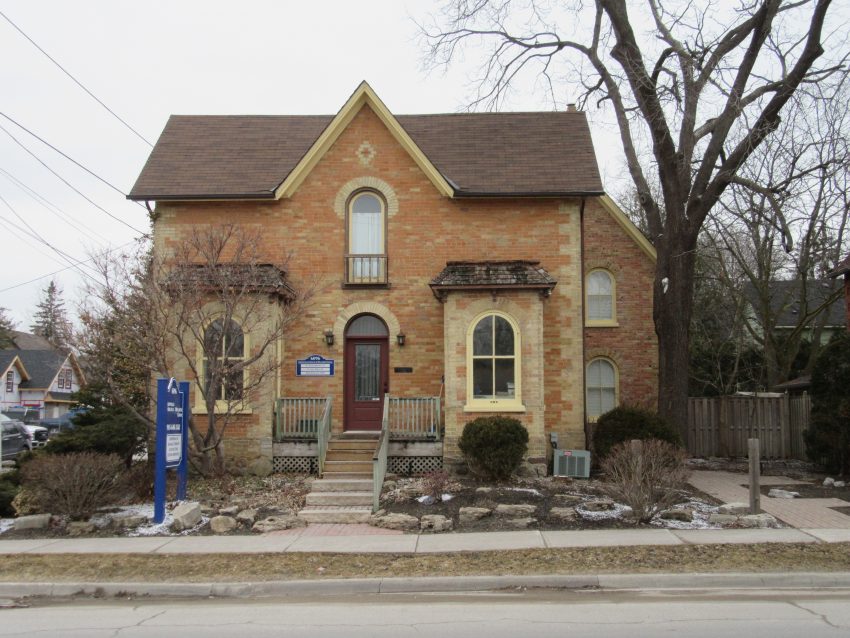 Stouffville Main Street brings history to life with many of its homes that were built in the 19th century. One example is the former home of Joel Baker, at 6096 Main Street.

The fine orange brick home with its many chimneys and fancy corners stands at the intersection of William St. and Main St. The residence was on Lot 9 Plan 35 and built 1884. It became the home of Joel Baker who retired there in 1885. The assessment in 1884 was $250 for the 2/5 acre lot. By 1885, the value had increased to $1200, which would likely indicate that the house went up.

As an act of kindness, Baker provided the place for rent, to Rev. Mr. H. W. Knowles, home missionary for the Presbyterian Church in town, back when it was still a frame church. Knowles purposed to have his family move into town.

Baker was born on July 31, 1823 at the old Baker Hill homestead, located near Hwy. 48 and Bloomington Rd. He was the son of Emanuel Baker and Elizabeth “Betsy” Horner. Joel was married June 5, 1849, by Rev. William Jenkins. The couple had the privilege to be married 50 years.

At one time he owned a shingle and planning mill near Ringwood. Later, he ran the sawmill at Baker Hill for a number of years. While in town, he engaged in the lumber trade, which was located on Edward St. He was a joint partner with his brother J.L. Baker of Stouffville mill.

Baker also served on Whitchurch council, as the town had not yet been incorporated. His years included 1867, 1869 – 1872. He was an advocate for proper drainage, efficient street lighting and a system of waterworks.