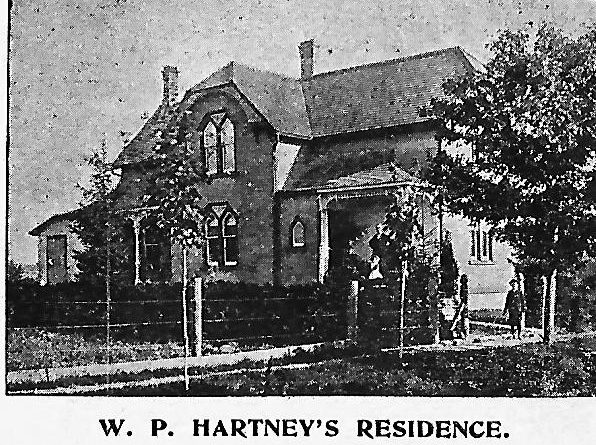 This rare one of a kind house has decoration known as gingerbread.

In fact, the design speaks to a special feature, the pointed paired windows with matching pointed shutters. Most of the exterior elements are all original from the first day built. This speaks to the proper maintenance and proud upkeep of the building. It also says that it was well made in the beginning to stand the test of time.

Other features include the curved roof over the front porch which has turned columns purchased locally. The roof design, called a jerkin head, speaks to the lowered hip rafters on the gable ends. This is the only house in town with this roof shape.

The Hartney family settled in Markham Township where William was born in 1831. Mr. William Hartney moved to Stouffville as a young man in 1870. He married Mary Brimson on April 4, 1871 and had four children. Sad to say they all died very young.

The home was built in 1889 by William P. Hartney a businessman in town. Mr. Hartney purchased the lot from David Stouffer for $125. Hartney took out a mortgage for $600 in the fall of 1889, which took him ten years to pay back. Hartney lived here for 15 years. He sold the home to George Washington in 1905 for $1125.

Hartney was first engaged with William Somerville in the tanning business on the north side of Main St. He later took on a supply company for lumber, coal, plaster and other building supplies. His business enlarged and flourished with the market demand.

In a second business, he was dealing with coal, wood and grains. Mr. Hartney built the first grain elevator on the station grounds. He later sold it to Todd & Cook.

During his residence here W. P. Hartney was involved in the library being the first president of the Board. He always had a keen interest in the affairs of this community. Mr. Hartney served on council for several years.

He invested in affordable housing by building the first row houses on Albert St. They became known as the “Hartney Terraces.” Mr. Hartney was on a committee for the fire prevention back in 1890. He was also part of the founding board for the first Stouffville creamery.

This home is one of a few original houses still left on Victoria St. We are losing many like this every year. It is well worthy of heritage designation.