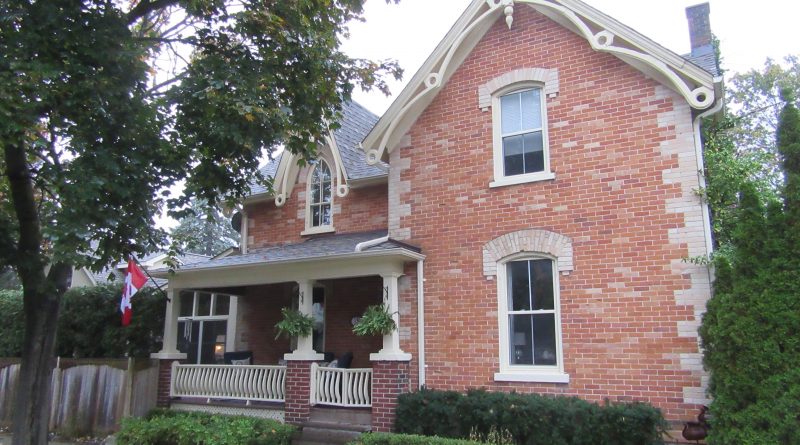 Located in the heritage neighbourhood north of Main St. this early one-and-a-half story brick home was built in 1876.

The two lots were held together for a number of years. The plan was registered in January of 1876 and during that time there were only half a dozen houses west of the tracks. This was the first plan west of the railway. The rail line came to Stouffville in 1871, just before the village was incorporated in 1877.

Rev. William Percy was pastor for the Christian Church faith with buildings in Altona, Ringwood, Bloomington, Churchill, Markham and other places for 40 years. The house was not taxed as it was a manse. Rev. Percy was married in 1862 to Esther Elizabeth Graham of Queensville. They had eight children.

During a late Tuesday evening or early hours of Wednesday morning, a burglar entered into the home of Rev. Percy on Albert St. and stole his Sunday pants and $30. The thief got into the home through a window which had been left unfastened. if the thief was willing to return the pants before Sunday morning he will do a great favour and no questions would be asked.

Elizabeth Percy, the daughter of William and Esther (Graham) Percy, came forward to donate an admirable gift of a clock in the new tower. This clock was to be made by the same company as the one at University of Toronto and the one at the Parliament Buildings in Ottawa. Interestingly, the same company made Big Ben in London, England. The clock was to be dedicated to her parents.

Mrs. W. Percy was a great woman herself being of vision and public spirit, having been a White Ribbon Crusader for prohibition.

The Victorian house has orange and red bricks with buff highlights around the windows as voussoirs. There is quoining on the corners of this building and around the Gothic window on the east face is very unique feature. The decorated fascia and finals are all original.

The house had three porches at one time. A north porch has been closed in, while the east porch is in original condition as designed. There was a south porch which is shown on the fire maps.