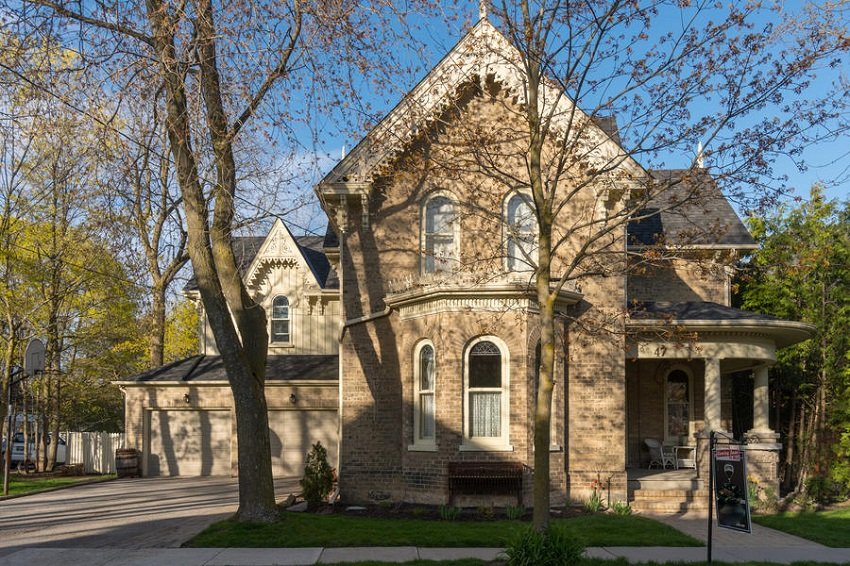 This home was built by William Mason, c. 1883, when the land was still not on a plan but part of the original parcel bought by Abraham Stouffer. Mason’s wife was Margaret Rae Mason. They were married March 9, 1870. Mason farmed on what was known as the Keith farm, but retired to Church St. He died on March 1, 1893, at the age of 49

His wife then inherited the home. She was able to share housing with her cousin Florence Rae in 1901 and later with her brother James Rae, his family grew to include six children. They were Nettie, Margaret “Alice”, Carrie, William, James, and Frank. The whole family all served in various ways the village of Stouffville. Two of the girls worked at the post office with their dad. They were also active in the local church. This generous family was able to carry on the tradition which can be seen when the daughter Carrie (Mrs. Turner), left a legacy in her will; The United Church general fund received $1, 000, the Women’s Missionary Society received $100, as well as the Lion’s Club swimming pool (that was the old outdoor pool), the Stouffville Cemetery Commission received $250 and the balance went to her brother Frank, $98,262.

Frank Rae was a tailor by trade and conducted his business here for over fifty years in town. His shop was over the Spofford store. He also served in the WWI. He remained a bachelor all his life. He was one of the town’s leading historians and aided the local paper with background on the elder citizens. He was on the official board for the United Church for several years. On his death May 14, 1962, it closed a chapter of the Rae family residence on Church St. It had been over 80 years.

The home is now described as being on Lot 29 Plan 70. This yellow brick home has retained many of the original Victorian features. The round top windows with the corbelling of brick work and a keystone element. The lower bayed extension with the wrought iron work gives the place an elevated class. The gingerbread is well preserved and in good shape and highlights the steep roof line. Just under the eaves are large decorative detail brackets. The huge curve porch was added to the south side likely about 1920. The more recent addition to the north is very much a complement to the original design and retains a lot of the heritage elements. The board and batten of the garage make it easier to distinguish the new addition in keeping with historic principles.

One thought on “Historic tidbits about 47 Church Street”